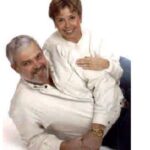 It’s the magic hour of 4:00 a.m. on August 28, 2006.  Even with prescribed sleeping pills, since the death of Kirk, I can’t sleep beyond this hour.  In the darkness, I think, cry, and sob deeply.  I shake to the point that I wonder why I haven’t fallen out of my skin.

I try to stay in the moment and not think of what it will be like to live without him tomorrow, next week, next month, and next year.  Every hour of every day, while he was alive, I planned my life around his presence in my life.  We awoke every morning at 6 a.m., I fed him breakfast, fixed his lunch and kissed him goodbye at the door.  Traveling daily on Highway 93, to work at Smurfit-Stone Container, always concerned me.  Odds of him dying, while driving, were statistically proven.  He beat those odds, for 19 years as he witnessed and avoided countless accidents.  It had become habit, in my final hug at the door, to remind him to come home safely to me.

I was a joke in his shop.  His co-workers had become so used to expecting that it was me who was calling that they wouldn’t approach the telephone when it rang.  Kirk never missed his breaks, not because he was due them per company policy, but because it gave me assurance if I needed him, he could be reached.  I didn’t abuse his break times, but rarely did a day go by that I didn’t speak to him at his lunch hour.  I couldn’t bear waiting an entire day to hear his voice.

On the sofa, I drank coffee and looked out into space until I saw the time “7:30” on the grandfather clock in our living room.  I waited 15 minutes longer; thinking someone from work would call me if Kirk didn’t arrive.  Without a phone call, I began my day.

Always watching the clock, 9:10 break time entered my awareness.  My day of activities continued.  Noon arrived.  I telephoned the mill.  At the afternoon break, my thoughts filled of Kirk…knowing where he was if I needed him.

I lived my life by the clock.  At 4:00 p.m., I turned on Oprah and began preparing dinner.  At 4:45 p.m., I was kneeling on the couch, watching down the street for Kirk to turn the corner and come up our street.  When I saw his car, I opened our front door to let our Sheltie’s meet him at the curb.  I stood on the step, awaiting my comfortable hug because of our size difference, welcoming him back home safely.

For 14 years and 353 days, my life revolved around Kirk H. Benish.  I seldom called him honey or sweetheart.  I called him “Mr. B, Precious, and Sir” out of complete respect.

You, who read these words, may think this writing is due to grief or romanticizing my relationship falsely…but you would be wrong in thinking so.  I told him, daily, that I loved him more than air, itself.  When he passed away on August 11th, I felt like the world stopped moving and had to beg God to breathe through me because I no longer had a Will to do so on my own.

I’ve written and published books and a song about my love for this man.  When I spoke about Kirk to others, he would scold me later, “Stop telling people that I can do anything because it makes me sound like I’m a know-it-all who really can’t do anything.”  Those talents he possessed were so natural to him that he didn’t place value on them.  It would be like telling you how wonderful you are because you can put your feet on the floor and get out of your bed.

None of us will understand the events that led up to his death.  Time only and God’s Grace will comfort.

The loss of Kirk Benish is not only mine.  His friends, co-workers, family, and the world…though they know it not…are affected.  Kirk found common ground with everyone.  He listened to others.  I am not saying, “he heard what others spoke,” I’m saying he listened to every word, knowing the importance of words being spoken.  He encouraged.  He guided with great wisdom.

Did Smurfit-Stone Container know the value of this employee?  If so, it wasn’t reflected in his paycheck.  They couldn’t have afforded him if they knew the value he offered for 19 years.  What price do you put on keeping morale uplifted?

An employee of Smurfit-Stone had spent years being bitter and angry.  Kirk’s contagious gold fever infected this man and his life transformed.  The man’s foreman thanked Kirk for changing this man’s life…because it affected all the employees around him.

What price do you put on a man’s sincere honesty and values?  Kirk never pretended that belching and passing gas were of entertainment value.  He refused to generate funding for movies that showed suffering for humanity in the form of men, women, and children being harmed in any way.

Kirk treated me like a lady.  He put me first in every thought and decision and I did the same.  He treated other women with respect.

Kirk made me feel secure.  He was a plumber, electrician, carpenter, mechanic.  He hand-carved a grandfather clock watch for me for Christmas.  He sewed “footie pajamas” for me, with pockets and a V-neck for my enjoyment and comfort.  You see…he really could do anything…

Kirk was honest.  You knew not to ask his opinion unless you wanted to hear the truth.  Most people, including me, are afraid to be totally honest because we might hurt another’s feelings.  It takes a brave and loving heart to be honest rather than to lie.

The consciousness of this planet has suffered a loss with the passing of Kirk.  God bless his mother, June, in the loss of her son.  It has been said that there is no greater pain, in this world, than to lose a child.

Kirk loved his four children and four grandchildren.  They loved and respected him.  He was a giant in his sibling’s lives…  Kirk would have and did, countless times, take on the pain and suffering of those who looked to him for strength and comfort and love.  His children and others who really knew this man have a yardstick by which to measure life and the expression of love to those in your immediate care.

What value does one put on a man’s soul and spirit?  Individually, in remembrance of Kirk H. Benish, my beloved husband, his life was priceless.  I can now pay someone to fix my dishwasher or dryer when it breaks.  I can pay someone to replace my hot water heater; I can pay for life’s menial problems…  I, however, could not pay someone to try to fill Kirk’s role in my life or to demonstrate moment-to-moment true love.

These are words I would have spoken at his Memorial, had I been able to stand on my own two feet that evening.  His elder brother, Bill, spoke that evening, “Kirk could fix anything…except his body…but, knowing him, he’ll just turn it into something else anyway.”

Kirk’s death is a tremendous loss.  Life will go on.  He may be forgotten by many, but those who know that these words I write today…are true… will remember him always.    In 12 more minutes, he would be leaving for work.  Life changes…it is me who needs to shower and walk out the door to go to the company where he worked for 19 years to do paperwork to set his life insurance and widow’s benefits in motion.

Kirk and I are One.  His spirit, that is absent of human good and bad, fills me and gives me the strength to go on.  His everlasting love guides me…